The Board of Directors of New England Division (NEDIAFC) and the NEAFC held two separate Special Meetings of their memberships on February 20, 2020. The meetings were held at the New Hampshire Fire Academy in Concord, NH. The purpose of this historic meeting was to vote on merging the two organizations into one New England Fire Chiefs organization. Both memberships voted to affirm the merger without a descending vote by either membership.

Brief History of NEAFC and NED

According to IAFC records, a group of New England Fire Chiefs attended the International Association of Fire Engineers (IAFE) convention October 11-14, 1921 in Atlanta, GA. There were no divisions at the time, only individual memberships. The IAFE membership voted to change the name in 1926 to the IAFC.

Although the NEAFC had been organized prior to 1923, they held their first convention in 1923 in Bridgeport, CT, which included all 6 New England States. They became a Corporation in MA in 1959.

At the 55th IAFC convention in Portland, OR in 1927, the NEAFC announced it had voted to become a division of the IAFC and paid $623.00 for its 623 members. This was also the first year that the IAFC went to a division type of membership. Individual memberships were dropped, which meant you were required to be a member of the division and the IAFC to pay dues. Fast forward to 1939, coming out of the Great Depression, the IAFC was challenged financially and wanted to increase the dues from $2.00 to $5.00. In 1940 the NEAFC only paid dues for 88 members out of the 800 members in protest of the dues increase. The NEAFC decided not to continue as an IAFC division and told its members that those wishing to do so should pay dues directly to the IAFC Secretary. A total of 254 members did so yet this posed another problem as the IAFC could not accept the dues because there was no longer an individual membership category. Therefore, the 254 New England Chief who wished to remain members of the IAFC could not pay dues without belonging to a division.

During 1943 and early 1944-time frame, 425 members that had not paid their dues to the IAFC formed the NEDIAFC and legally paid their dues as a division. The NED operated as a division with a board of directors identical to the NEAFC with similar by-laws. The NED held their first convention in 1968 and would have celebrated its 52nd annual convention this April 2020. During the past 76 years there have been many attempts to bring the two organizations together. One such attempt brought together the two organizations in a joint conference format from 1996-2015. Due to financial challenges and a downturn in attendance at conferences, the two organizations went back to having separate conferences in 2016. A relationship had been started between the two organizations and each started to trust one another. That same year the NEAFC board hired the NED secretary/treasurer to do the advertisement for the conferences. The following year he was given the duties of the event coordinator and performed those duties through present time. This helped to keep a communications link between the two organizations.

Most Chiefs had no idea why the two organizations existed , particularly since they had similar missions and shared the same goals. In fact, the majority of Chiefs belonged to both organizations. It was not only confusing to the fire service of New England, but the entire national fire service. Through NED and IAFC records we now know the reason. Finally, the New England fire chiefs are once again a united organization and have reestablished their connection to the IAFC. The future is bright for the fire service in New England. 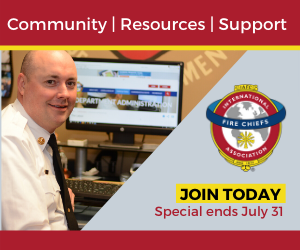